One of my favorite fish to work with is the Pterophyllum Scalare or more commonly referred to as Angel Fish. Over the years I have raised literally 100s of various color varieties of these elegant fish. The vast majority have been raised artificially by removing the slate the eggs are laid on and using Methylene Blue as a fungicide until they are old enough to transfer to larger tanks, then given away or sold. 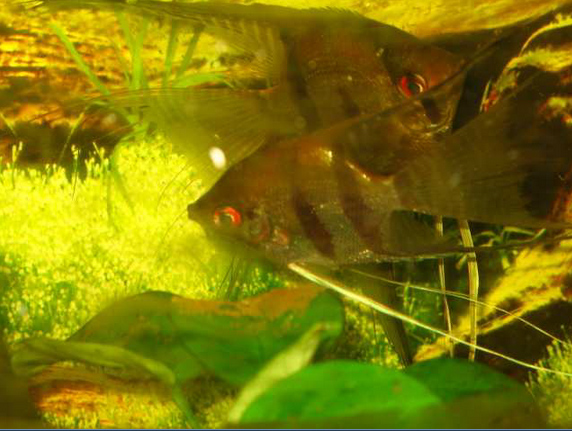 I now have been endeavoring to get them to pair off naturally and raise their own fry. This is partly to enjoy them caring for their young and partly because I am too old to deal with raising them artificially any more. At the 2006 Auction in North Tonawanda I bought a “Pair” of veil tailed Red Eyed SilverAngels (My personal favorite variety). They were kept in a 30 Gal tank with 2 Altum Angels.

The Altums are a larger variety also in the Silver color. I was hoping one pair would encourage the other to spawn. As I have written before, the presence of other angels tend to make the parents more protective of their eggs and fry.

The veils did spawn and raised their fry with the only assistance I gave was to feed the parents and fry live baby brine shrimp after about two weeks. I continued to feed all of them the same standard Flake food and brine shrimp diet for about 2 months. At that time the parents started to push the youngsters to the far side of the tank indicating they were about to spawn again. I removed about 15 fry to another tank where they have been ever since. The adults have spawned many times in the interim raising more fry to various stages.

The fry I separated are identical to their parents and were raised in the planted tank for about 9 months. Now I do not condone incest, but a brother and sister have spawned on an Anubias Hastifolia plant and very aggressively chased all their brothers and sisters to the far corners of the tank. Not wanting to create more problems I removed all but 2 of the extras, again to give the new parents someone to protect their fry from.

I am very happy to report the next generation is now caring for another generation of red eyed silver angel fry. When the fry try to swim off the leaf they were moved to, Mom & Dad scoop them into their mouth and put them back. This practice is identical to how their parents raised them. I will start feeding live baby Brine in about a week to help Mom & Dad. It is also interesting that the original pair are also now fanning eggs in their tank.

Now the question: Is it in the genetics of the fish to raise their own fry or was it because of the environment they were raised in that they are protecting and raising their own? I am not a scientist just a hobbyist who enjoys Angelfish.

PS: I have several other pairs that have spawned and had live fry but have not raised them as these have. Maybe it is in the genes.

Pictures of both pairs have been submitted with this article

This site uses Akismet to reduce spam. Learn how your comment data is processed.